Aloes In The Treatment Of Burns And Scalds

Recent medical literature contains many excellent articles on the treatment of burns. While numerous methods have been mentioned, in those most generally accepted, tannic acid is employed. In Bettman’s treatment, tannic acid is applied in a spray, and this is followed by application of 10 per cent silver nitrate. Apparently, this sequence has distinct advantages over the use of tannic acid alone. Good as these methods are, I have experienced annoyance from infection, and from the long period required for separation and removal of the coagulum in some cases in which I have used tannic acid. It has been a relief to me, therefore, to find a treatment which has eliminated these disadvantages. This method has proved so simple and the results have been so satisfactory, that I have not used any other treatment for burns since the spring of 1935. 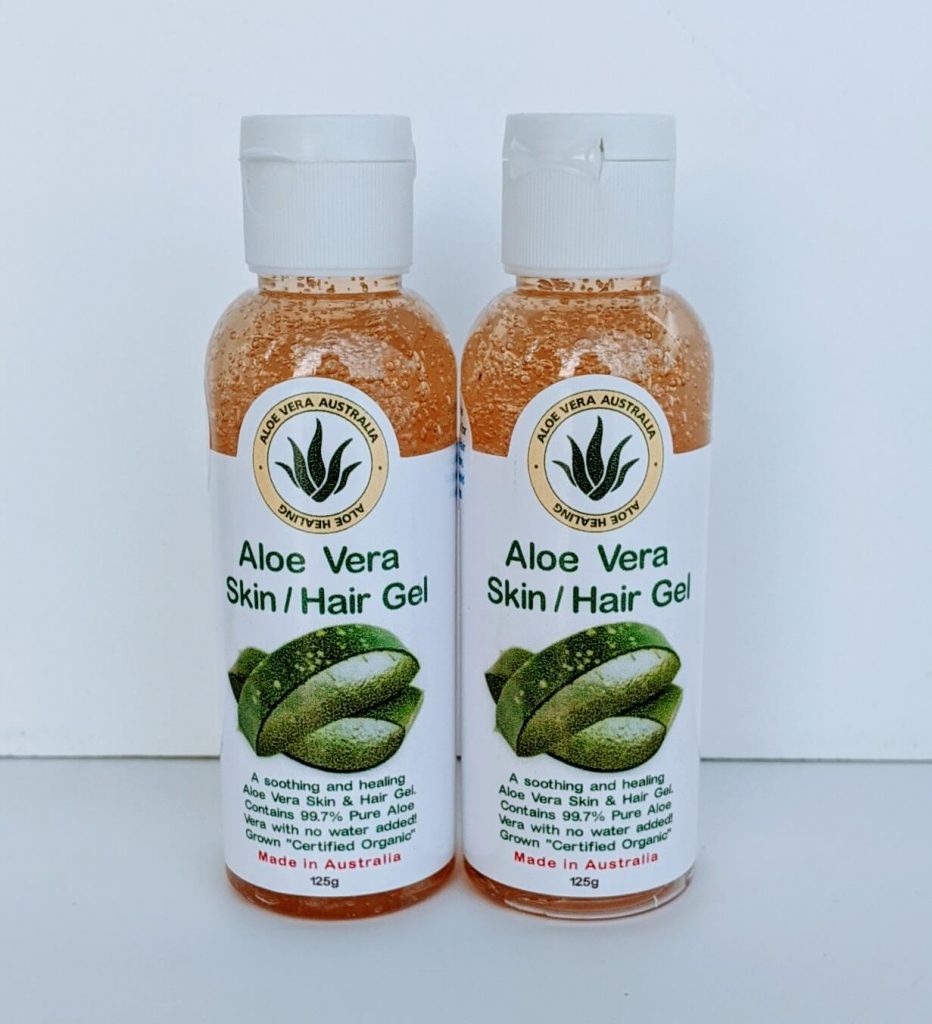 The usual precautions in regard to contamination and infection are taken. The affected area is cleaned as thoroughly as possible and, in some instances when the area is badly soiled, a preliminary application consists of warm moist dressings. These dressings are saturated in a solution composed of a teaspoonful each of borax and sodium chloride dissolved in a quart of water. If the burned area is fairly clean and a greasy substance has been used in first aid treatment, it is not necessary to remove all the grease as it will mix with the ointment that is to be applied.

When this preliminary treatment has been completed, sterile gauze is folded in about four thicknesses, to make an area large enough to cover the burn. If the burn is too large to be covered by one piece of gauze, or if it is in an area where a single piece would not fit snugly, more than one piece can be applied. The gauze is laid on a smooth, sterile towel and is covered with a layer of ointment at least 1/8 inch thick. This dressing is laid, ointment side down, on the burned area. More gauze may be placed on this dressing and the whole held in place with bandages or other material. No attempt should be made to spread the ointment on the burn, because it will not adhere readily to the raw surface.

Ordinarily, this dressing is not removed for two days. At the end of that time, the entire dressing can be removed as easily as a piece of wet writing paper is lifted from the top of a table. There is no sticking from dried serum or dried blood. The surface of the wound does not bleed but has a clean, glazed appearance, as if the area were covered with a thin, transparent film. Unless new blisters have formed, another dressing, prepared as before, is applied and each dressing is left in place for two days. Usually, only from four to six dressings of Aloes ointment will be required. Then zinc stearate or some other bland dressing may be applied.

It must be stated that, in the period that has elapsed since I have been using the treatment that has been described, I have not encountered any burns of sufficient severity to endanger life. There is no reason to believe, however, that good results might not be obtained by this method in treatment of more extensive burns.

A man stepped into a pit containing boiling water which had just been released from a pressure cooker in a canning factory. The leg, as high as the knee, was immersed in the water. Few blisters were encountered because most of the epidermis adhered to the patient’s underclothing and stockings when they were removed. In areas the size of a silver dollar, over the maleoli, the burn completely penetrated the integument. Treatment such as has been described was applied and the patient returned to work on the nineteenth day after the injury.

A girl, sixteen years of age, spilled boiling water over her feet. The very severe scald involved most of the surface, except the soles, of both feet to above the ankles. This patient lived in the country and came to the office for treatment only four times, on alternate days. The feet were coated with lard when she first was seen. Results from the treatment which has been outlined were satisfactory.

Two infants suffered smaller burns on the face, arms and chest, by falling against heating stoves. Dressings were easily applied because their application and removal were painless.

Two patients, with severe sunburn involving the shoulders and most of the back above the waist, both complained bitterly of pain when they came for treatment but they suffered practically no pain after the first dressing was applied. Only two dressings with the ointment were required. Then zinc stearate was applied.

My interest in Aloes for the treatment of cutaneous conditions began some years ago. I have reported some experiences with this substance. Originally, I treated chronic ulcers and some skin diseases with the fresh leaf of Aloe vera, obtained from Florida and the island of Aruba in the Dutch West Indies. However, it was difficult to obtain and preserve the fresh leaves and, after trial of ointments made in various ways, the two ointments that have been described were adopted. That made from Socotrine Aloes is dark brown, and that made from Barbados Aloes, nearly black. The dark color of Aloes ointment is a disadvantage because it soils the dressings and unbroken skin, but not more so than the various dyes and other colored substances which are used in treatment. Surfaces where the ointment has been applied can be cleaned with benzine and the residue can be removed with rubbing alcohol.

Aloes, used either as the leaf or ointment, possesses distinct analgesic qualities. Removal of ointment dressings, as has been said, is painless. Dense, white scar tissue is not seen after healing of burns but the burned areas are reddish at first and remain smooth and pliable. Healing is rapid. Aloes possesses some enzymotic action; pus is apparently digested for purulent surfaces become clean. The drug is astringent, possibly because of the tannin it contains. It has styptic properties in fresh cuts, when applied as a powder. Antiseptic properties are indicated by the rapid clearing up of infected surfaces. When burns are treated by the method that has been outlined, infection is negligible.

It might be feared that absorption would give rise to unpleasant effects but I have noted no evidence of absorption. Stools have not been loose in any case. No undesirable effect was seen when powdered Aloes was dusted in full strength, daily for a number of days, over the entire surface of large, chronic ulcers. Aloes is reputed to have abortifacient action but in treatment of one woman, eight months pregnant, the ointment was used for severe and extensive dermatitis caused by poison ivy and there was no evident effect on the uterus. Another woman four months pregnant, was treated with Aloes ointment for severe pruritus vulvae, without any untoward effect.

That this is not one of those measures which seems effective only in the hands of the one who advocates it is evident in the results which Collins and Wright have obtained with Aloes in the treatment of roentgenologic injuries.

The below testimonial from a user of our Aloe Vera Liniment demonstrates the success of our products in treating Skin burns and scalds:

“I have suffered with a serious skin cancer on my forearm and after some successful operations and skin grafts all was OK and healed. Then two months ago I developed a small red spot that began to spread until it covered all the area of the skin graft. It was itchy and inflamed and red raw and also weeping and painful and it would not heal. I then sought professional advice and was subscribed many different topical applications which had no success with resolving my painful problem.

Then as luck would have it, I was picking up boxes of Aloe Products for delivery with TNT Transport company (I am a driver) for Aloe Vera Australia and met the director Mr Saul Goodman who recommended that I use the Aloe Vera products that his company was supplying.

I obtained the Aloe liniment and also the Aloe Gel and did alternate applications with both products and was completely relieved to say that I received immediate pain relief and furthermore after one week the inflammation was diminishing. It is now 3 weeks and the red raw inflammation is all healed and I am back to normal. (see photo)

Thank you as I am so grateful that I discovered this natural method to resolve my very irritating condition. 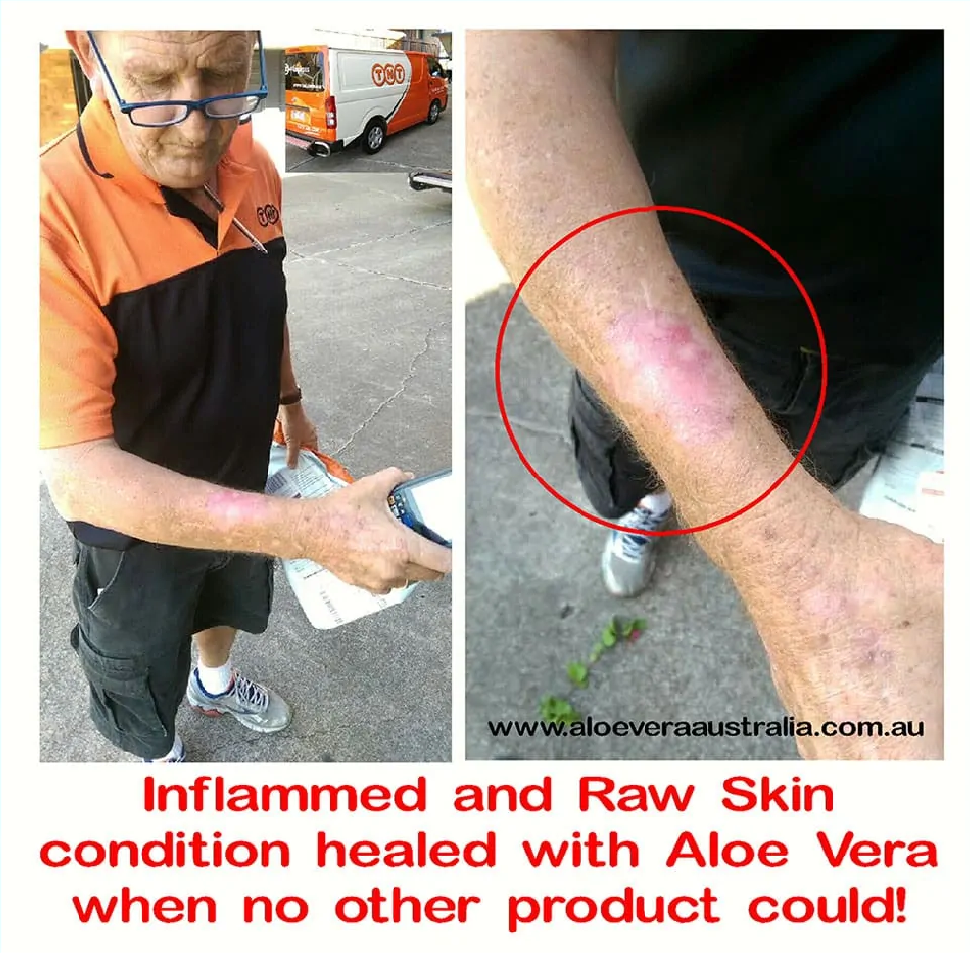