An examination of the biological activity of steroids and synthetics revealed that they  are both active yet toxic. In the search for natural substances, such as vitamins and amino  acids, that have biological activity, we serendipitously discovered that Aloe Vera had  many biologically active compounds that had anti-inflammatory, wound healing,  analgesic and anti-arthritic activity.

Mannose and glucose are the most significant sugars found in the Aloe Vera gel, and  they can be used to assay the activity of Aloe Vera. The gel contains important sterols  which can have anti-inflammatory activity. Amino acids such as tryptophane and  phenylaianine reduce inflammation. Studies have shown that vitamin C & B complex can  maintain adrenalectomized animals, and that minerals such as zinc are very important in  wound healing. Anthraquinones have good anti-inflammatory activity, but their activity is  usually obtained by working through an inflammation pattern. Salicylic acid and aspirin  are also highly biologically active. 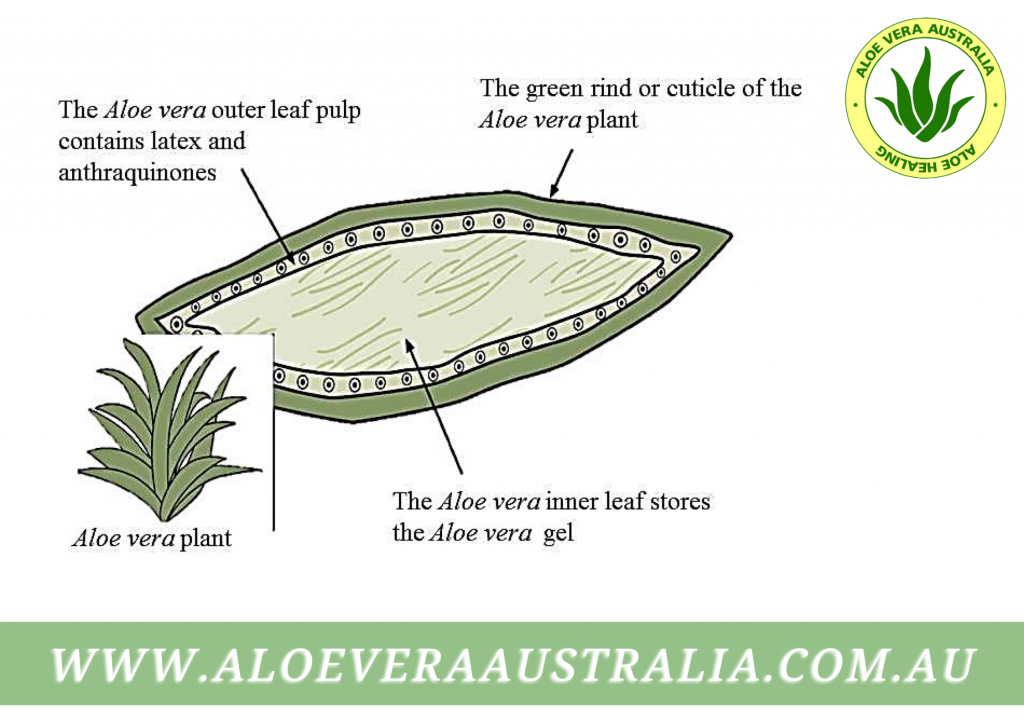 The rind is the manufacturing plant for carbohydrates, fats, proteins and vitamins. These  Aloe Vera constituents are transported throughout the leaf by the phloem, and other  materials are brought up from the roots by way of the xylem. These two mechanisms aid  in transporting the Aloe Vera under the influence of the wind. Mucilage was once  thought to take part in this transport process, but researchers now feel that it acts as a  container for the gel fillet or the storage of Aloe Vera.

If one takes the liquid mucilage and freeze dries it, one finds that the mucilage looks and  acts like a bandage. It has occlusive “coverlike” properties as well as biological activity.  The topical anti-inflammatory activity of mucilage at the 1% dosage is 3.8% in  decreasing edema, whereas at the 5% dose level, it is 33.7%.

A consideration of the sol-gel transformation becomes very evident as an animal bites  the Aloe leaf. The sol which is a colloidal system under the influence of many factors can  be converted into a colloidal gel. If this system could be transported to the human wound,  one would have an excellent topical wound healing treatment.

In the Aloe leaf synthesis, carbon dioxide and water are converted to an “active carbon  that is used to make carbohydrates, lipids, protein and vitamins. The Aloe Vera cell,  visible at a magnification of about 40,000, is surrounded by a cell wall, has a large  nucleus and two cell membranes the cytoplasm of which manufacturers  mucopolysaccharide. The mucopolysaccharide is stored within the lumen of the cell.

Aloe Vera could prevent adjuvant arthritis 72%, and cause a regression of 22 to 26% at a  dosage of 150 mg/kg per day. In another experiment, we proved that Aloe Vera was  effective in reducing inflammation over a broad spectrum of irritants in experimental  animals. The percent inhibition by Aloe Vera ranged from 76.9% against gelatin to  22.7% against dextran. In evaluating vitamin C’s influence on localized adjuvant arthritis,  we found that it could reduce edema 80%, inhibit PMN infiltration, and decrease the pain  induced by the adjuvant arthritis. However, there was no influence on the paw  temperature. Anthranilic acid, a metabolite of tryptophane, could inhibit PMN infiltration  as was evident in the peritoneal fluid of adjuvant arthritic rats.

The topical treatment of adjuvant arthritis with combined Aloe, RNA and vitamin C  produced a 25.2% prevention inhibition and 45.1% regression inhibition at a dosage of  1.5% concentration of each.

Aloe Vera is also a good vehicle for vitamin C and other important agents. Tryptophane  and phenylalanine had good local anti-inflammatory activity in inhibiting PMN  infiltration. In fact, the inhibition effect approaches that of the steroid. While phenylalanine was able to inhibit granuioma tissue weight in adrenalectomized Tanimals  synergistically with cortisone, tryptophane did not synergize with the steroid.

When we placed a cotton pellet under the skin of a rat we found that Aloe Vera was  unable to inhibit the growth of granuloma tissue. Aloe Vera had no antifibrosis effect  over a dosage range of 50 to 400 mg/kg administered for 12 days.

While Aloe Vera had no chronic anti-inflammatory influence, we wondered if it could  inhibit the detrimental effects of the steroid on wound healing. Aloe Vera could inhibit  edema in diabetic animals in a dose-response fashion up to 80% over a dosage range  from 10 to 100 mg/kg.

A similar response was obtained in diabetic animals by Aloe Vera in inhibiting the  infiltration of PMN’S. Aloe Vera definitely can block the vasoactive substances  responsible for inflammation, can constrict small blood vessels, can block PMN filtration,  as well as inhibit production of oxygen radicals.

Years ago we felt that wounds should not be covered. However, we found that dry  wounds drop, and prevent the migration of cells and the influence of wound healing  growth factors. With Aloe Vera acting as a cover, the wound remains moist, and there is  an excellent migration of epidermal and fibroblast cells. So there is an increase in covered wound healing over that of uncovered wounds. Aloe Vera increased the wound  healing over a dosage range of 1 to 100 mg/kg in a dose-response fashion.

This was the first study that demonstrated that Aloe Vera was effective in animals.

Aloe Vera is a modulator. It has an inhibitor system capable of blocking the immune  system observed in the adjuvant arthritic animal, and it can block the mediators  responsible for inflammation.

Gowda demonstrated that mannose phosphate is the significant constituent in the 50%  Aloe Vera extract (Gowda 1979). At the same time, Morgan showed that the mannose  phosphate will bind to the insulin like growth factor receptor (Morgan 1987).  Willenberg’s study exhibited the anti-inflammatory activity of mannose phosphate  (Willenberg 1989). Its ability to improve wound healing is evident.

The “Aloe Vera molecule” consists of a protein at one end and mannose-6-phosphate at  the other end. The polysaccharide chain contains one glucose which is covalently linked  to the protein with six mannose sugars moving toward the insulin, like the growth factor  receptor of the fibroblast. The “Aloe Vera molecule” can stimulate the fibroblast to increase collagen and proteoglycans.

We feel that the protein part of the Aloe Vera molecule acts to guide the polysaccharide  chain into the receptor. The mechanism of action of Aloe Vera at the present time seems  to inhibit pain and inflammation, but also can, by means of the growth factors, stimulate  the fibroblast to increase wound tensile strength.

The slopes of both curves were similar. However, we have decided to use the four-day  treatment as the curve on which to best assay Aloe Vera on wound tensile strength.  Gibberellin, a plant growth hormone, stimulated wound healing in a dose-response  straight-line fashion over a dosage range from 2 to 100 mg/kg. Auxin was also shown to  have good biological activity. Gibberellin could also block PMN infiltration even in  diabetic animals up to 60%.

Aloe Vera may have an additive or a synergistic relationship with over 100 compounds  to produce biological activity. It is possible that Aloe Vera acts as a kind of conductor  which produces music with an orchestra of many biological active ingredients. It seems  presumptuous for us to consider, or even to postulate that any one substance is  responsible for the biological activity seen in the Aloe Vera gel.

We made an air pouch in animals by administering 30 ml of air under the skin. In seven  days we administered 1% carrageenan into the pouch, and two hours later we  administered 10% Aloe Vera to determine what effect Aloe Vera would have on the air  pouch synovium.

We found that Aloe Vera could stimulate the pouch wall weight by increasing the  number of fibroblasts. This agrees with previous findings that the alcohol precipitate of Aloe had its greatest effect on wound healing by stimulating the fibroblast. Aloe Vera  decreased by 60% the mass cell count and wall vascularity.

The effect of Aloe Vera on a 1% carrageenan-irritated simulated joint synovium model  proves conclusively that Aloe Vera stimulates the fibroblasts, as seen in the wound  healing studies, and inhibits inflammation, as evidenced by the decrease in vascularity  and the reduction in mass cell count.

We have shown that some of the constituents of Aloe Vera have biological activity  similar to amino acids, vitamin C and growth factors like gibberellin and Auxin. Some  attention was given to how the Aloe leaf makes and stores the gel. Mention was also  made of the fact that we have seen what we call the “Aloe Vera Cell” in our laboratory at  40,000 magnification. In addition we have shown that the “Aloe Vera molecule”  probably does not act alone, but rather acts in either an additive or synergistic fashion  with some of the 100 constituents of the Aloe Vera.

Danhof I 1987. Aloe Through the Ages, Volume 1. Omnimedicus Press.