Specialized molecules in Aloe Vera whole leaf extract interact with some special “receptor” substances that are embedded into the outer membrane of our immune system cells. The result is that the immune system cells are galvanized into action. In particular, the class of cells known as “phagocytes” increase the activities by which they attack, and then engulf bacteria, waste products and debris. This increase in scavenging activities cleanses and protects the body, with knock-on benefits for a whole cascade of different medical conditions. The literature indicates that a common mechanism in this respect probably exists in both humans and animals and that both can benefit enormously from use of Aloe Vera. 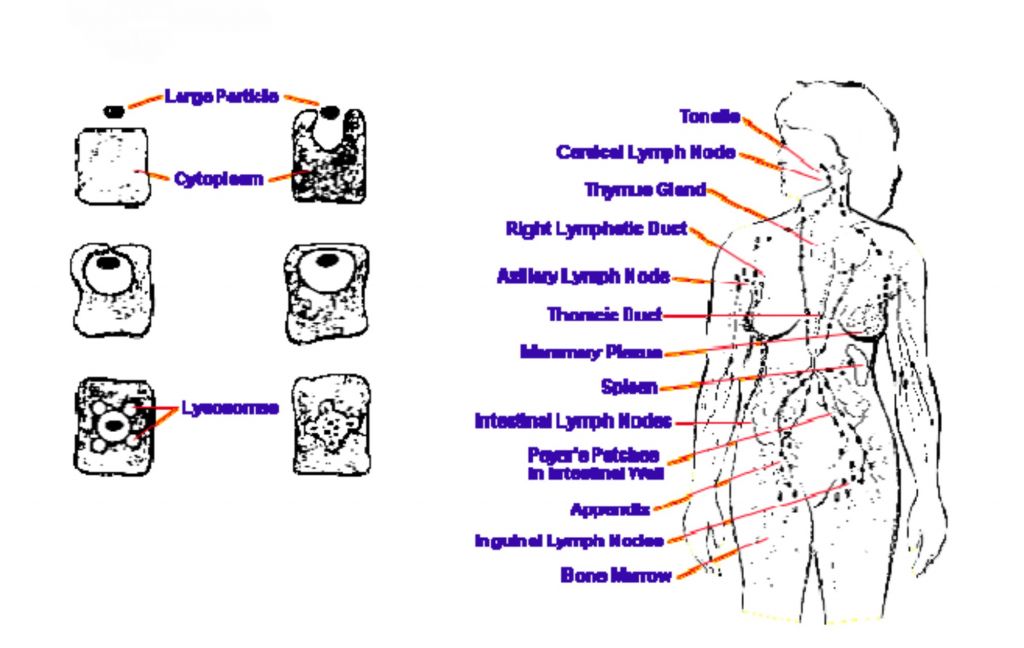 The Nature Of The Immune System And Phagocytes

The Immune System provides the defense mechanisms of the body. It is concerned with defense against foreign cells and foreign substances. It Involves the white blood cells (leukocytes) and some special plasma proteins called “antibodies.” Very especially important are the types of white blood cells known as “lymphocytes.” These cells, while they form a most important component of the white cells in the blood, they actually travel extensively within the body. Many of them, originating in the bone marrow, travel to the thymus gland, where their further development is influenced, and they then establish themselves in a number of centres around the body, especially the lymph glands in the neck, armpit and groin areas and in the spleen. Here they constitute centres of “lymphoid tissue.” The tonsils and the appendix also constitute centres of lymphoid tissue and hence should be regarded as part of the immune system.

Two other very important type of cell in the body’s defences, both of which are also white cells, are the “macrophage,” a name derived from the Greek and really meaning “big eater” and the “neutrophil.” Both of these cell types carry out the process called “phagocytosis.” This is a process of engulfing foreign particles and cells, and this includes the debris from body cells which may have been killed by bacterial toxins or by environmental poisons which have found their way into the body. The engulfing process consists of the cell sending out processes of its own cell substance until they join up around the offending item and consequently draw it into the cell. Once within the cell the engulfed particle is enclosed within a membranous “vesicle” which separates it from the rest of the cell. Digestive enzymes and oxidizing substances can then be poured into the vesicle from the cell to digest or otherwise destroy the offending item.

This process of phagocytosis plays an important part of the overall processes of immunity. The actual phagocytosis step is really a cleaning up operation after some of the earlier immune processes have taken place. In the earlier stages, antibody proteins are likely to have been produced against the offending item, which coat it and make it more “palatable” to phagocytosis. Also, if the offending item is a bacterial cell, or even a moribund body cell, it may have been killed by the action of “killer” lymphocytes. Nonetheless, phagocytosis is an extremely important step and can be seen as a cleansing process. The phagocytosed item is “neutralised” and ends up being destroyed and eliminated. The digestive and oxidising processes that take place within the phagocyte destroys the structure of the offending item and makes it unrecognisable as what it was. The effect is therefore both protective and cleansing. The phagocyte may even migrate to a place from which it will be eliminated, as when it migrates to an area of pus, such as a boil, and the pus is eventually shed from the surface.

Obviously, anything which can make the process of phagocytosis more effective and more active is going to be significant for the processes of immunity. Such a substance will be an immune system stimulant. Aloe vera is such a substance.

Scientific Literature References To The Immunostimulant Action Of Aloe:

Shida T; Yagi A; Nishimura H; Nishioka I 1985: Effect of Aloe Extract on Peripheral Phagocytosis in

Yagi A 1987: Effect of Amino Acids in Aloe Extract on Phagocytosis by peripheral neutrophils in Adult

1990: Effects of low molecular constituents from Aloe vera gel on oxidative metabolism and cytoxic and

Sheets MA et al. 1991: Studies on the effect of acemannan on retrovirus infections: clinical stabilization of

Imanishi K 1993: Aloctin A, an Active Substance of Aloe arborescens Miller as immuno-modulator.

The following references relate to human adult bronchial asthma and identified a positive effect upon phagocytosis in these patients.

Shida T; Yagi A; Nishimura H; Nishioka I 1985: Effect of Aloe Extract on Peripheral Phagocytosis in

Yagi A 1987: Effect of Amino Acids in Aloe Extract on Phagocytosis by peripheral neutrophils in Adult

The following reference relates to the stimulation of immune activity in mice by local activation of a substance known as “complement” and by increase in antibody production. In its conclusions it makes reference to the “activation…of human polymorphonuclear leucocytes.” Once again it is clear that major immuno-stimulatory activity is being reported.

In addition, the following article by J.C. Pittman cites that “Acemannan has direct effects on the immune system, activating and stimulating macrophages, monocytes, antibodies and T-cells.” T-cells are one of the major classes of lymphocytes. Pittman also says that “It (acemannan) has been shown in laboratory studies to act as a bridge between foreign proteins (such as virus particles) and macrophages, facilitating phagocytosis.” Acemannan is a trade name given to a mannose-rich polysaccharide extracted from Aloe vera.

The consequences of having a more effective immune system are extremely farreaching. Perhaps the most obvious and most expected change is that the body is very much strengthened with regard, not only to fight infection, but also with regard to keeping infections at bay in the first place. The work that has been done in this area includes both bacterial and virus infections of various types. The biochemical literature shows clearly that this is the case.

In order to present a balanced picture, it has to be stated that not all plant substances which stimulate the immune systems of animals and humans do so in a useful, efficacious and supportive way. There is a whole range of such plant substances, loosely classified under the heading of “lectins” which, although they are immuno-stimulatory, nonetheless fail to produce a good and useful effect on the immune system that is of demonstrable benefit to its performance. The special importance of Aloe is that its immune-active effects have been clearly shown to be of functional benefit.

Next, it is clear, and well known, that the body’s fight against tumours is also mediated through the immune system, which has an ability to kill and remove tumour cells. The outcome is presumed to be determined mainly by the vigour of the immune system response to the tumour. There is even one form of cancer therapy, known as “immunotherapy” which involves culturing the patient’s own immune cells (killer cells) outside the body in the laboratory and then re-injecting them. However, clear evidence exist showing that under laboratory conditions Aloe preparations are capable of slowing or stopping the growth of tumours or even causing them to shrink. This can be demonstrated both with active, growing tumours in vivo and also with tumour cells culture. So far there are no trials on human cancer, but anecdotal accounts certainly exist of Aloe being effective against tumours. 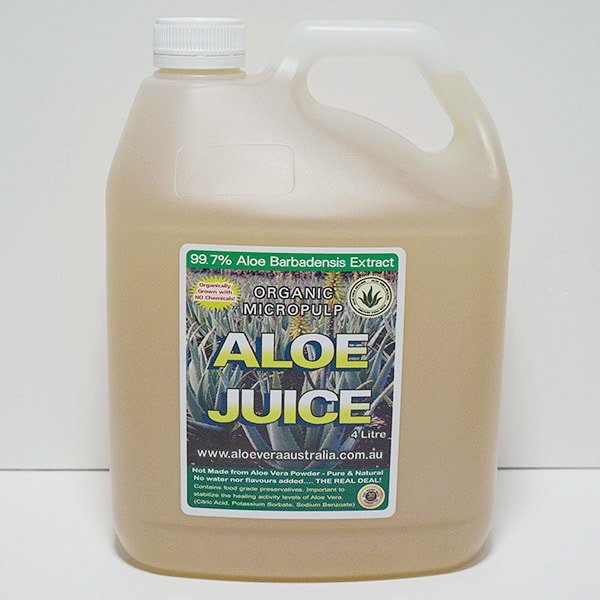 The whole area of auto-immune disorders is one where we might well expect benefit from the use of a substance, such as Aloe, which makes the immune system more effective. Auto-immune disease is perhaps rather a special case, since the defects which exist do not relate so much to a deficiency of immune function, but rather, it is a misdirection of immune function. However, there is some evidence which favours a conclusion of efficacy for Aloe in auto-immune conditions. This need cause no surprise in view of Aloe’s known anti-inflammatory properties combined with its tendency to normalize immune function. Here there is offered a simple list of conditions which might well be expected to be benefited by a better direction of function in the immune system – i.e. auto-immune conditions. Pernicious anaemia, Hashimoto’s thyoiditis (i.e. one type of thyroid insufficiency), Graves disease (i.e. Thyrotoxcosis), Type 1 Diabetes, Rheumatoid arthritis, Systemic Lupus and Lupus erthematosus, Myasthenia gravis, Auto-immune haemolytic anaemia, Goodpasture’s syndrome (a type of glomerulonephritis, i.e. kidney disease), Addison’s disease (deficiency of the adrenal cortex), Mixed connective tissue disease and Scleroderma. Multiple sclerosis has an auto-immune element.

Most of these diseases have not yet been subjected to trials with Aloe vera. However, it is the nature of the fundamental actions of Aloe which leads to the conclusion that the application of Aloe to these conditions could well produce favourable results.

The gastro-intestinal tract is a significant location for immune function. There are concentrations of immune (i.e. lymphoid) tissues throughout the intestines. The small intestines contain the special areas called “Peyers patches,” but the large intestine, together with the appendix, is also a rich area for lymphoid tissue. Bowel health and function is an area of particular interest for the application of Aloe vera amongst Alternative and Complementary health professionals at the present time. The scientific data which exists on this area is generally supportive to their conclusions in this respect, but there is relatively little such data available at present, the subject having attracted the attention of only a few scientific investigators. Nonetheless, there are several reasons for believing that immune function is extremely important to the functions of the intestine, and this too will be reviewed in future Aloe vera newsletters now being planned. The existence of this connection raises the distinct possibility that Aloe vera will be found, in future biomedical studies, to benefit such conditions as colitis, including ulcerative colitis, polyposis of the colon, diverticulitis, irritable bowel syndrome and Crohn’s disease. Much anecdotal evidence from Alternative health professionals and their patients already suggests that this is the case.

Candidiasis – infection of the intestines with Candida albicans – is an obvious case in which immune system response is obviously crucial – and it seems apparent that it is a stimulatory effect which would be needed.

Lastly, and particularly interestingly, their are diseases known or believed to involve the immune system in a major way. The most obvious of these is allergies. On the face of it the last thing which the immune system might appear to need in such cases is stimulation, because the trouble appears to arise from an over-stimulated condition of the immune system in which the system attacks foods and environmental non-foods in an unnecessary and unproductive way. However, allergies can also be viewed as a mis-direction of immune function and it is possible that Aloe may in future be found to help to put the immune system back into a better ordered state of function and to alleviate allergic conditions. So far no scientific work seems to have been done in this direction. Other conditions within which the immune system appears to play a major part, as yet undefined, would include ME (myalgic encephalomlyelitis). This presentation has been limited to demonstrating the existence of the immune-stimulatory effect and listing conditions which either definitely do benefit from Aloe treatment or can be expected to do so with varying degrees of confidence. Future issues of the Aloe vera newsletter will explore many of these aspects rather more fully and will also introduce the other fundamental modes of action of Aloe and their likely benefits to disease conditions.