The uses of substances derived from Aloe vera plants in a folk medicine role are widely recognized. The actual value of these Aloe substances and other plant derived substances in helping to improve pathologic conditions, relieve complaints and restore health has been debated from antiquity to the present.

Evolving historical patterns of the use of plant substances in traumatic conditions and in systemic illnesses have revealed that man may have first observed animals who were injured or ill to be eating or rolling in patches of certain plants. Subsequently, early man found that these plants would aid in healing human illnesses. Initially, Aloe substances were mainly used as healing aids for topical skin problems and conditions and this has remained their most wide spread use to the present. However, over the years the use of these and some other plant substances has been extended into scientific experimental treatments for internal upsets and conditions.

Another pattern of evolution in Aloe and other phytotherapeutic substances is taking place today. This pattern follows the usual pathways observed for other crude plant medicinal substances in which they are gradually replaced by chemical drugs. For example, the usual process has been to isolate the active ingredients from crude plant medicinal substances and then develop derivatives. This first move to change from crude plant medicinal substances to chemical drugs has been driven by increasing scientific interest in the pharmacological mechanisms of the crude plant substances acting as drugs against such diseases as AIDS and cancer. In the usual situation of this type, active components from crude plant drugs are isolated and purified by means of sequential chemical processes and their structures are determined. Then the bioeffects of these purified active plant components are studied using in vitro experiments, in animal therapy models and then later, and in much more detail, in human subjects with applicable disorders. Table 1 presents uses and origins of some representative plant substances which have allowed this evolution.

There are several major reasons why the evolutions in uses and in the forms of phytotherapy substances are continuing to occur and why these evolutions will continue at an even more rapid pace in the future. First, medicinal plants from the land and sea only grow in a few areas of the world and they are difficult to discover, so their supply is very limited. Second, not all medicinal plants can be cultivated away from their native origins. Third, the content of the medically active substances in the plants has been found to vary considerably according to the method, the time and the place of collection, the weather before and during the harvest period, and the water and soil used for culturing.  These and other plant cultivation factors will make it difficult to maintain in the long term a constant supply of original plant substances of consistent potency. With an ever increasing market demand for the plant medicinal active substances, this major disadvantage of crude plant substances stands out when compared to synthesized drugs which are free of these problems.

In addition, the Aloe substances, like the other crude drugs, are usually used for more than one illness or set of symptoms. They also are usually used in combination with other drugs and given for a long time in small doses. Moreover, Aloe is a complex mixture of a wide variety of biologically active components. These Aloe substances are in some way integrated naturally to mainly exert what appears to be a synergistic effect and also to counteract side effects.

Although we are now in the “age of chemical drugs for medical use,” Aloe applications have been and continue to be based mostly on “folk medicine experiences.” It is granted that many chemical components have been isolated from various Aloe materials and some of their chemical and bioactive properties have been determined. However, only a few of these isolated Aloe substances exhibit the same pharmacological effects of the whole Aloe. Therefore, it appears that in the case of Aloe bioactivities, the whole may not be equal to the sum of its parts, but may be many times greater than the sum of its parts – a multiplier effect!

For Aloe substances today, it is most important now to determine what the most productive pathway will be to follow in the future. I believe this pathway should have the following major markers:

In summary, the present posture of Aloe substances is presented in the following as it relates to several major areas of importance to scientific investigators and potential sponsors of research. 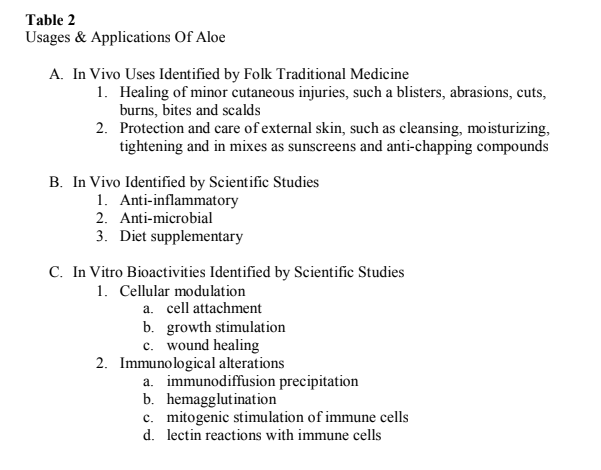 It is important to note that phytotherapeutic substances, i.e., plant derived substances used in treatments of medical conditions, when employed in a folk medicine setting do not perform in all medical situations. Moreover, little is known about the site of action of Aloe substances, namely whether they act at the systemic, organ, tissue, cell or subcellular levels or at the surface-cytoplasmic, nuclear-genetic or structural biological and metabolic levels of cells. Accordingly, it is obvious that swallowing boiled leaf extracts will not dissolve blood vessel fatty plaques or blood clots. Likewise, drinking tea brewed from plant parts will not reverse myocardial infarction damage or lung cancer.  The point made is that we all recognize that there are major limits to traditional folk medicine uses and that it is dangerous to advise the use of plant substances in folk healing approaches over the advantages of modern day medicine.

In conclusion, while numerous medicinal Aloe remedies have been proven to folk  medicine satisfactions by time and usage, without any scientific reason behind why or how they work, current scientific studies are being directed to identify and understand  the operational mechanisms of action of Aloe substances. Such studies, when completed, promise to even further expand the potential usages and biomedical applications of Aloe.

The medicinal claims made about Aloe vera, as with many herbs and plants, are endless. Some are backed by rigorous scientific studies while others are not. This article focuses mainly on those that are backed by research. (1)

Aloe vera (Aloe barbadensis miller) is a succulent plant used in alternative medicine. With a total of 420 various plant species of Aloe vera, it has been popular in Indian medicine for the treatment of many conditions. For centuries, the plant has gained immense popularity for its beauty, health, skin care, and medicinal properties. (2)