Aloe and other Topical Antibacterial Agents in Wound Healing

Unlike any other wound, the burn is a non-uniform injury in which some tissues are partially or completely damaged, while other tissues suffer minimal damage. The latter will heal without any therapeutic treatment, while the former will become permanently damaged, creating a granulating wound if not appropriately treated.

Infection also plays a major role in the conversion of this wound¹ Many of the topical agents used are to control burn wound infections. However, there are other products that have multivaried effects on the burn wound. Some of the major properties attributed to Aloe vera include its ability to:

Heggers and his co-workers³showed that topical application of anti-eicosanoids, more specifically anti-thromboxane agents, could reverse progressive tissue necrosis in the partially damaged tissue. Topical application of an Aloe compound resulted in healing patterns comparable to the anti-thromboxane agents. Robson and his colleagues² also showed that such an Aloe compound had anti-bacterial properties as well.

Therefore, topical application of anti-microbials and other chemo-therapeutic agents is essential in order to restore the normal healing process and prevent infection. Halsted has been quoted as saying, “A wound which has been irrigated with solutions of carbolic acid, corrosive sublimate, or other disinfectant labors under the disadvantage of a more less extensive area of superficial necrosis”³. McCauley and his colleagues4 have show that both silver sulfadiazine and Sulfamylon® are toxic to fibroblasts in tissue culture at concentrations of 0.005% and 0.1%, respectively. Leitch, et al recently presented data that silver sulfadiazine, Sulfamylon® and silver sulfadiazine with chlorohexadine significantly retarded wound healing in the acute wound model.

Since application of topical chemotherapeutic agents is essential in the prevention of infection and enhancement of wound healing, we examined Aloe’s role in accelerating wound healing or reversing the wound retardant effect of silver sulfadiazine as well as the influence of Bactroban® and clindamycin on the healing process.

Cells at 5×104 cell/well were plated into 96-well flat-bottom plates and maintained 24 hours at standard conditions in adherence studies. The media was removed before the addition of the Aloe-DMEM mixture. After 72 hours of incubation, 10ul of MTT (3-[4,5-Dimeth-ylthiazol-2-yl]-2,5-diphenyl-tetrazolium bromide) solution (5mg/ml) was added to each well. The formazan crystals, formed only in viable cells after four hours at 37o C, were dissolved by addition of 100ul of acid-isopropanol solution. The plates were read by a Micro ELISA reader (MR 580 Dynatec) at 570nm (630nm reference wavelength, calibration setting of 1.99).

The acute model was used as previously described by Heggers, et al.8 Appropriately anesthetized Sprague Dawley rats, two proximal and two distal, received four 1.5 cm² dorsal defects through the skin and panniculus carnosus. This study was conducted in compliance with UTMB’s Animal Care and Use Committee under ACUC protocol #92- 05-026. (Fig. 1) 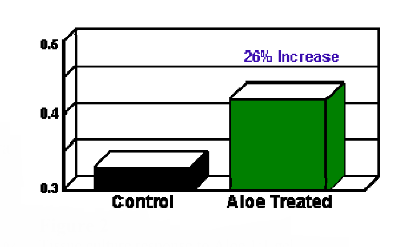 The rat adrenal cultured cells in the presence of Aloe vera gel #5 showed a 26% increase in growth activity when compared to the control (Fig. 2). Therefore, we utilized the Aloe vera gel #5 for our in vivo assay.

Significantly increased the breaking strength (2.000 + 0.504) of the healed wound, Aloe alone was slightly stronger than the control silver sulfadiazine.

Topical application of a variety of cytokines to open wounds has revolutionized the process of wound healing. Hayward, et al9 provided evidence that the basic Fibroblast Growth Factor (bFGF) reverses bacterial retardation of wound contraction in a chronic granulating wound.

Carney and his co-workers10 showed that exogenous delivery of synthetic Thrombin Receptor-activating peptides enhanced the healing process and neovascularization of an incisional wound. In a clinical trial Bishop, et al11 evaluated two potential wound healing agents in a blinded trial for the treatment of venous status ulcers. Contrary to previous in vitro and in vivo studies by McCauley, et al4 and Leitch, et al5 the Bishop study showed that silver sulfadiazine was significantly more therapeutic in healing the venous status ulcer when compared to a biologically active tripeptide copper complex or a placebo. These results suggest that a silver sulfadiazine cream may facilitate healing in wounds that heal by epitheliazation. Robson and co-workers,12, 13 in two separate publications, reported on the efficacy and safety of platelet-derived growth factor B-B and bFGF in chronic pressure sore ulcers.

Our previous studies have provided evidence that Aloe vera may contain a growth factor like substance.2, 3, 4 Recently, Winters 14 presented data regarding a growth stimulating as well as a growth suppressant substance in Aloe gel. PAGE analysis revealed the presence of a polypeptide species possibly responsible for these activities. By immunoblot technique, the Aloe substances were found to contain Na+/K+ATPase and Con A activities. These mitogenic lectin-like substances in Aloe have been previously described.

Therefore, with this foundation of knowledge regarding the exogenous administration of cytokines and Aloe substances in the process of wound healing, we closely examined Aloe vera gel 1:1 (#5) to provide further evidence of its wound-healing potential compared to other chemotherapeutic agents.

McCauley, et al4 showed that silver sulfadiazine in tissue culture was toxic to fibroblasts and keratinocytes, and Leitch and his co-workers5 showed that it retarded wound healing in vivo. We wondered if Aloe would respond as bFGF did in reversing the retardation of wound healing9 and if the treated, healed wound was stronger or weaker than the control wound.

The Aloe-alone treated wounds healed faster and had a half-life of 6.14 days which was significantly (p<0.05) shorter when compared to the other groups (Table 2). The silver sulfadiazine and Aloe group, while it healed significantly faster (p = <0.05) than the Bactroban® silver sulfadiazine, clindamycin groups, had a half-life of 6.94 which was slightly longer than the control wound (half-life 6.38).

In 2015, a group of researchers performed a through examination of aloe vera’s effect on cutaneous wounds. Publishing their results in the journal BioMed Research International, the team found that aloe vera is quite effective in dealing with this specific wound type. While both polysaccharides and glycoproteins were mentioned, the scientists also brought attention to other compounds. Glucomannan, for instance, stimulates the growth of fibroblasts, and it’s these cells that help build new collagen and tissue. Other chemicals in aloe vera also can foster the secretion of the body’s own insulin-like growth factors, which are mostly responsible for blood vessel regrowth. (1)

Aloe vera has been used to treat wounds since ancient times. However, data regarding the efficacy of aloe vera for burns and split-thickness skin graft donor sites are inconclusive. Aloe vera is a cactus herb that grows in tropical climates. It has been used to treat acute wounds since ancient times. Numerous medicinal products are made from its mucilaginous tissue, called aloe vera gel, which is located in the center of the aloe vera leaf.1 Aloe vera contains 75 potentially active constituents, including vitamins, enzymes, minerals, sugars, lignin, saponins, salicylic acids, and amino acids.Its prostaglandin and bradykinin-hydrolyzing enzymes, carboxypeptidase and bradykinase, have pain- and inflammation-relief properties. Mannose-6-phosphate, a polysaccharide, supports the epithelialization process and tissue reorganization, induces fibroblast proliferation, activates collagen deposition, and accelerates wound healing.Acemannan, which is another polysaccharide, is a white blood cell activator that has an important role in the activation of the wound healing process. Anthraquinones, which have antibacterial properties, help to prevent wound infection. (2)