The effect of Gibberellic Acid (GA3) and Benzyladenine (BA) on Aloe vera was evaluated at pot cultivation conditions. This study was performed in two factorial test based on complete random plan and 4 repeats with 12 treatments. The main factor was included spraying, drip and spraying + drip. Secondary factor was included concentrations of GA3 and BA at 0, 100, 200 and 400 mg.L-1 levels. The number of Offset was increased by addition of GA3 and BA levels. The results show that the number of Offset has been better in drip application than spraying method. The use of drip+spraying method has caused improve in the plant than other methods. The maximum offset was obtained in 400 mg.L-1 concentration of BA. 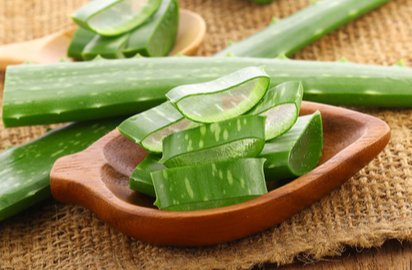 Aloe vera [Aloe barbadensis] which belongs to Liliaceae family is a perennial plant with rosette growth pattern compatible with subtropical regions. This species is native to southern and eastern Africa, but is commercially cultivated in different region in America, European and Asia [10, 15]. In recent years, Aloe vera gel is widely used in cosmetics industry due to physiological and biological properties. Also it used in wound healing because of its anti inflammatory, antifungal, antibacterial antiviral and medicinal properties [16]. Aloe plants are propagated by two methods: sexual and vegetative. Aloe barbadensis is the most common species in gel production. It has a high rate of male sterility which results of cross-pollination; therefore propagation via seed leads to genetic segregation in daughter plants [13,14]. For commercial production and increasing leaves yield, we need to have a method that plantlet can be produced in a short period of time. Offset is the important method of vegetative propagation for Aloe plants. Offsets are produced from the end of short stolon and can be used as a propagule in perennial plants propagation [4]. Although the offset production rate in Aloe vera is high, it is not enough for commercial production. Slow rate of offset production is a serious obstacle in developing Aloe vera cultivation. Therefore, offset production should be increased. Due to these reasons, using agronomy practices seems to be necessary in order to produce a lot of plants in minimum time. Cytokinin is widely used in ornamental plants production. It is one of the most important hormones which regulate plant growth and development. It has an important role in promoting cell division, differentiation, leaf development and increased nutrients mobility in plants [5, 17]. Several studies have shown that plant growth regulators such as cytokinins could improve shoot growth [4]. Spraying cytokinins on Hemerocallis citrine have shown that it can increase offset production via affecting cell division, offsets size and growth by stimulating lateral buds growth [1]. Few studies have been conducted on evaluating the effect of cytokinins on root system of Liliaceae family. Cytokinin is a plant hormone that synthesized in root and it has irritating or inhibiting effects on root development. High cytokinins concentration prevents roots growth, but lower concentrations result in improved root development and growth [19]. Cytokinin is a hormone which can increase flowering production in many plants [4]. Therefore, the purpose of this study is the effect of various levels of Gibberellic Acid [GA3] and Benzyl adenine [BA] on Offset production in Aloe vera.

In 2012-2013 year, Aloe vera [Aloe barbadenisis] plants were cultivated at the experimental farm of University Azad Jiroft. Two factorial methods in complete random test with 4 repeats and 12 treatments were used for this expriment. Uniform offsets size of 18-20 cm were completely randomly selected, then transferred to greenhouse and were planted in pots with capacity of 20 kg soil. Greenhouse temperature was 22ºC to 28ºC during night and day, respectively. Plants, based on field water capacity, were uniformly irrigated.

The Offset of Aloe vera were immersed by Gibberellic Acid contained 0 [control treatment], 100, 200 and 400 mg.L-1. Gibberellic Acid was 0.l %. Tween-20 surfactant, by spraying, drip and spraying + drip methods was used at two stages for each pot. They used as 100 cc of solution at each stage with 15 days intervals [4].

The Offset of Aloe vera were immersed by benzyladenine contained 0 [control treatment], 100, 200 and 400 mg.L-1. Benzyl adenine was 0.l %. Tween-20 surfactant, by spraying, drip and spraying + drip methods was used at two stages for each pot. They used as 100 cc of solution at each stage with 15 days intervals .then the number of produced Offset were measured after 60 days from spraying [4].

After 120 day, for each treatment were randomly selected four plants. The number of Leaf, The number of offset and Leaf length were determined in this experiment.

SPSS 18 was used for analysis of the data obtained from the experiments. Comparisons were made using two-way analysis of variance [ANOVA] and Tukey’s test. Differences were considered to be significant at P <0.05.

In other words, difference between the use methods is not same at various areas of GA3 in this trait. The number of Offset was increased with increasing the various areas of GA3 and BA [Fig 1, A and B]. The maximum number of Offset was obtained in spraying+drip spraying methods 400 mg.L-1 concentration of GA3. The results show the number of offset in spraying + drip methods has been better.

The Height number of Offset Secondary Test was in a plant in applications of 400 and 200 mg.L-1 BA , with respectively, with average of 9.75 and 8.25 that which did not show statistically significant a meaniful diference [Tab 2].

In this experiment, BA increased offsets number that can be attributed to decreased apical dominance by main stem [6]. This result was in accordance with those achieved by Carey et al. [4]. Considering the cytokinins effects, it was entirely predictable that spraying BA on plants stimulates cell division and increased cell number [18]; therefore, application of BA results in higher offsets number. These results were in concordance with Carey et al. [4] on other Liliaceae family plants [Echeveria and Sempervivum]. This combination is already to reduce lower leaf yellowing and senescence in certain pot crops. This combination may also serve to induce flowering in some crops. However, gibberellins are also reported to be antagonistic to cytokinins and may actually reduce their ability to induce branching or reduce senescence. A combination BA+GA application may work better if BA and GA3 are applied separately [one to four weeks apart]. This way, the grower gains the strongest effects of both. Benzyladenine would stimulate branching and the later GA could stimulate the growth of the new branches. 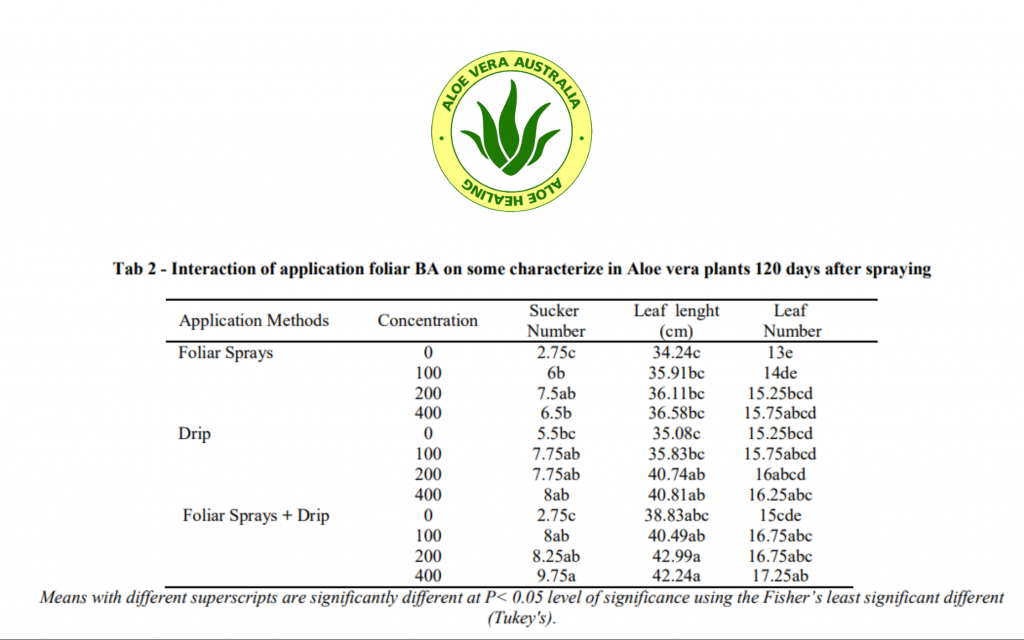 As indicated in mean comparison [Tab 1] the leaf number and Leaf length were simultaneously decreased by increasing BA levels. Foliar+drip application of BA and GA3 with concentration of 400 and 200 mg.L-1 had the maximum leaf number and Leaf length, while the lowest of leaf number and Leaf length was related to control treatment. As indicated mean comparison [Tab 1, 2] foliar application of BA resulted in leaf number had the highest in treatment with 400 mg.L-1 GA3. Increasing the number of Leaf is a result of BA role in cell division and assimilated transport [18, 9]. According to the biological effects of Plant Growth Regulators compounds, the results were entirely predictable that foliar application of BA and GA3 stimulates cell division and increased cell number; therefore can result in increased offset number, Leaf length and Leaf number. These increases were in accordance with those results achieved by [2, 3, 8, 11]. Aloe vera plants grow slowly and offset formation rate is slow in them. Application of BA-type cytokinin hormone increases cell division and lateral bud formation. 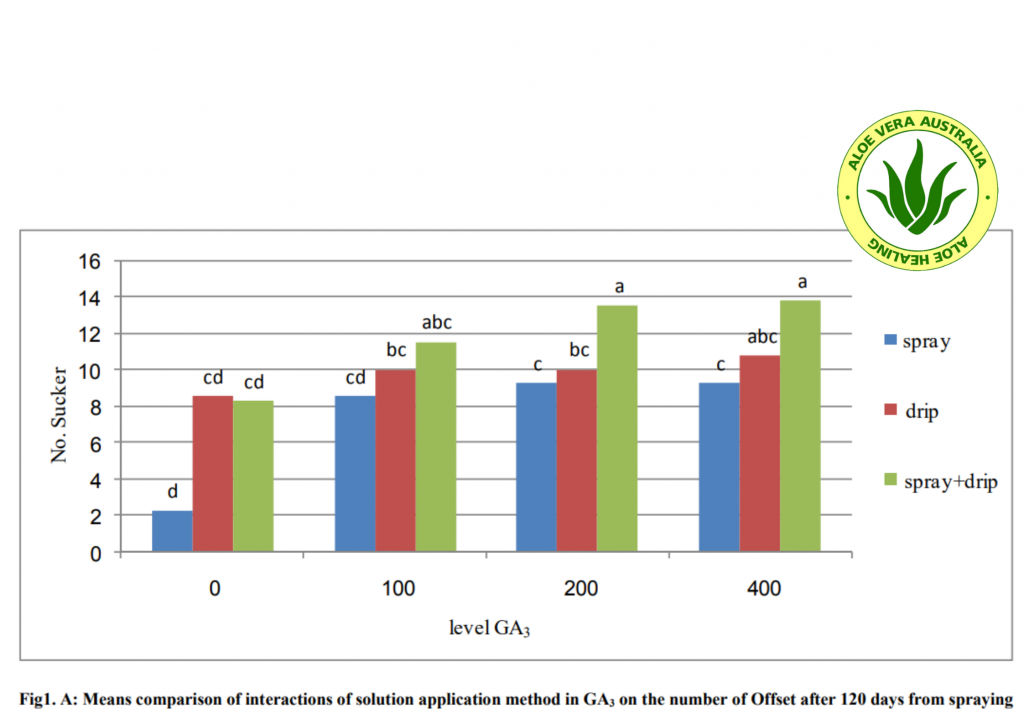 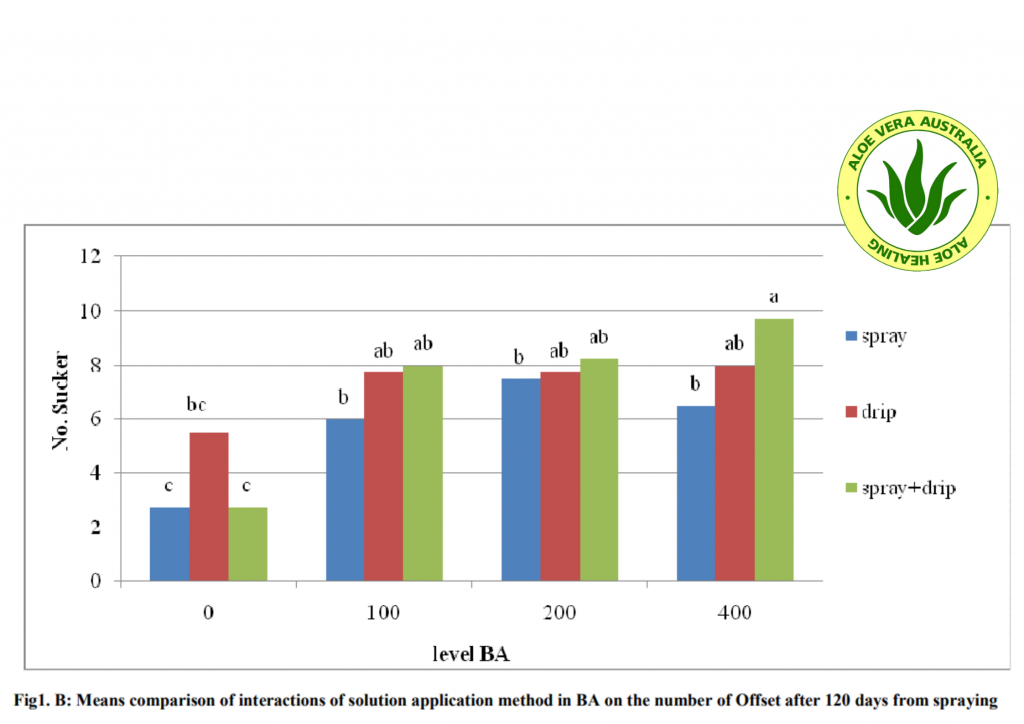 Drip may also be an effective method for applying cytokinins to rooted plants as they can be absorbed through the roots and will be transported via the xylem to the most metabolically active tissues [meristems]. Drip may reduce or prevent leaf phytotoxicity caused by surfactants and solvents. However, care must be taken as roots tend to be more sensitive to exogenous cytokinins and high concentrations can hinder root growth. Drip applied cytokinins move throughout the plant rapidly. Cytokinin-induced photosynthetic rates of plant and change 2 hours after exogenous applications [7]. Drip may also be applied to newly planted crowns [12] or be mixed into the storage substrate used for bulb scaling [9]. Providing the proper growth conditions for obtains the Offset with large size and high quality has particular importance. However many studies has performed on other plants in this family, few studies performed about the effect of hormones and their application on Aloe vera.

Based on our results it can be concluded that foliar application of BA and GA3 with concentration of 400 mg.L-1 can increase offsets number. Present study showed that higher levels of BA and GA3 prevent Leaf growth. Further research on the relationship between growth regulators and offsets production is necessary