Rheumatoid arthritis is a painful and crippling systemic disease for which there is no cure.  The best experimental model for studying rheumatoid arthritis in humans is the adjuvant induced arthritis in rats. One of the group of compounds found in Aloe is the  anthraquinones. These substances have been recognized for their use in veterinary medicine  against inflammation. The authors evaluate the anti-inflammatory and antiarthritic activity  of anthraquinone, anthracene, cinnamic acid, and anthranilic acid found in the Aloe Vera  plant, and show what contribution each ingredient makes toward the total activity found in  Aloe.

In previous studies, the authors have shown that Aloe gel extract has anti-inflammatory and  antiarthritic activity.1 Combinations of Aloe with ascorbic acid, thymus extract, and RNA  significantly improved the activity.2 The chemical makeup of Aloe holds a valuable key to  antiarthritic activity that could be used by podiatrists to treat patients.3Elements in Aloe gel  include lignin, saponins, anthraquinones, inorganic ingredients / minerals, vitamins,  enzymes, and amino acids. Anthraquinones such as anthracene have been recognized for  their use in veterinary medicine against inflammation. They possess anti-inflammatory,  analgesic, and tissue repair properties.

No doubt anthraquinones have a bearing on the healing and pain-killing effectiveness of the  fresh leaf gel. Few people understand the meaning of the anthraquinone complex in Aloe.  Many studies verify the successful treatment of burns, ulcers, and dermatitis, but no one  knows why Aloe has these healing qualities.5 The authors propose to test the antiarthritic  and anti-inflammatory activity of anthraquinone, anthracene, cinnamic acid, and anthranilic  acid in an adjuvant arthritis model in order to determine if there are possible ingredients that  can be used to treat rheumatoid arthritis. This approach will help us understand the  antiarthritic activity of Aloe. The purpose of this study is to determine, in part, the active  elements in Aloe so as to unlock the mystery of the gel. Many medicines in common use  today, such as digitalis and quinidine, were derived in a similar way from barks and leaves.

Adult male Sprague-Dawley rats (175 to 200 gm, 12/group) were injected with heat-killed  Mycobacterium butyricum. The bacteria were suspended in light mineral oil at 5 mg/ml.  Under ether anesthesia, two groups of rats were injected in their right hind paw with 0.1 ml  of oil. All the other groups were injected with the suspended bacteria. Six hours after the  injections, the day 0 measurements were taken. Two experiments were conducted together.  One study investigated the effect of anthraquinones on the prevention of adjuvant arthritis.  The other study determined their effect on established adjuvant arthritis. Three control  groups were used. The animals injected with oil alone were used to be sure that the oil,  itself, did not cause swelling. One of the groups injected with adjuvant was also injected  with distilled water at the same times and amounts as those groups being treated. This was  done to determine whether the volume and frequency of injections affected the amount of  swelling. A third group was injected with the adjuvant.

In the first experiment, prevention of adjuvant arthritis by anthraquinones was studied. The  right hind paws of two control groups were injected with the adjuvant, and day 0 paw  volume measurements were taken. One of the control groups was injected with 10 ml of  water subcutaneously daily for 13 days beginning on day 0. Either anthraquinone,  anthracene, cinnamic acid, or anthranilic acid was injected into rats in four other groups that  had received M. butyricum. Each day the anthraquinones were injected subcutaneously at  150 mg/kg aqueous suspensions.

In the regression study, the rats were injected with M. butyricum suspension. The symptoms  of adjuvant arthritis usually take from 14 to 21 days to develop. After 21 days, treatment  was initiated with 150 mg/kg suspensions of anthraquinones subcutaneously daily from day  21 through day 33.

The rats were anesthetized with ether on paw-measuring days. Their hind paw volumes  were determined by dipping them into a fluid-filled cell up to the anatomical hair line. Day  0 measurements were taken 6 hours after the paws were injected with M. butyricum adjuvant or oil alone. This initial measurement was used as a reference from which units of  edema were calculated in the prevention study. These units of edema were calculated by subtracting the day 0 volumes from those measured on days 7, 14, and 21. The base-line  values for calculating units of edema in the regression study were measured on day 21. Day  21 values were viewed as 0 units of edema. The hind paws were measured on days 0, 21, 28,  35, and 38 for this study.

The animal’s body weight was measured on days 0 and 2l in both studies and day 38 in the  regression study. The change in weight during the experiments was calculated by  subtracting from day-38 weights in the regression experiment. The change in edema was  divided by the change in weight to obtain a relative change in edema. This served to rule out  any gain in paw volume caused by weight gain. A CU-5 Medical Land Camera was used to  photograph representative rats on days 21 (prevention study) and 38 (regression study). This  was done to demonstrate the difference in paw edema between the rats receiving  anthraquinones and the control rats. Mean paw volumes and body weights were recorded for  all animals. Standard errors were determined by using the formula SE = E d2/N(N – 1). The  deviation of individual values from the mean is Ed2, and N – 1 represents the degrees of  freedom.

Prevention of Arthritis. Aloe has antipyretic and anti-inflammatory activity that has been  used to treat burns and skin conditions over the years. Splitting the leaves of Aloe and  applying the gel directly to burns produces beneficial effects.8 The curative principle occurs  within the pulp and rind of the leaf.9 The authors have administered fresh Aloe leaf extract  to prevent or regress adjuvant arthritis. Aloe extract produced a 48% inhibition of  inflammation and a 72% inhibition of the immune response (the arthritis) when 150 mg/kg  of Aloe extract was administered subcutaneously, daily, over 13 days as preventive  measure.1

The anti-inflammatory and antiarthritic activity of the anthraquinones were tested to  determine if they could prevent the formation of arthritis. An increase in volume of the right  hind paw is an anti-inflammatory response to the presence of the adjuvant, whereas the  swelling of the left hind paw is an autoimmune response, in part, against the animal’s own  cartilage. Mycobacterium butyricum is similar to cartilage so that the immune response  attacks both. Swelling occurs in both hind paws injected with adjuvant. This swelling  continues to increase over the entire experimental period. Aqueous controls received equal  amounts of water injections as those receiving injections of anthraquinone. Since these  animals swelled somewhat more than those receiving the adjuvant, the volume or the trauma  of daily injections contributed to the disease process. In order to more accurately estimate  the effect of the compounds under investigation, the response of anthraquinones was compared to the aqueous injected adjuvant controls.

Forst and Davis10 have shown that anthranilic acid has antiarthritic activity. This compound is present in Aloe and was considered as an activity internal control so that the authors could be certain that the responses  recorded in the study were real and not phantoms. Edema in the right hind paw (inflammation) was 40% less than the aqueous adjuvant control animals on day 21 (Table 1; Fig. 1). The left hind paw (immune) was 35.5% less than the controls. The  percentage of inhibition by anthranilic acid corrected for body weight was 79.7% in the inflammatory paw and 42.4% in  the immune paws. Tryptophane, an active anti-inflammatory compound, is produced from  anthranilic acid. Previous work showed that tryptophane inhibited arthritis 75% in the  immune paw.10 Anthranilic acid may work through tryptophane. 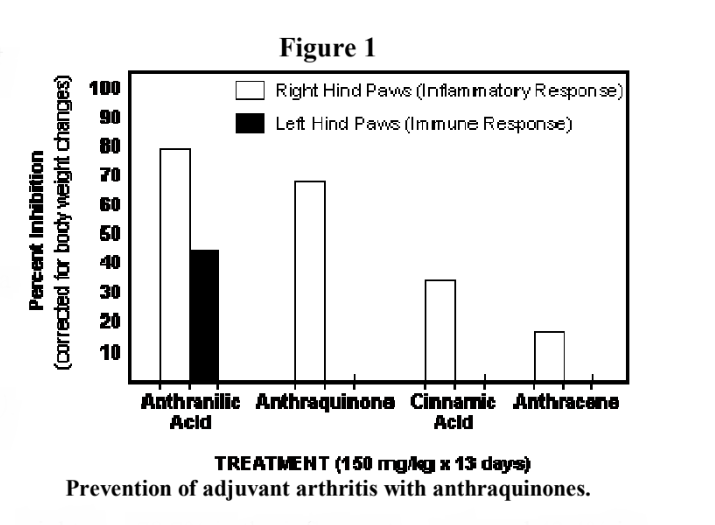 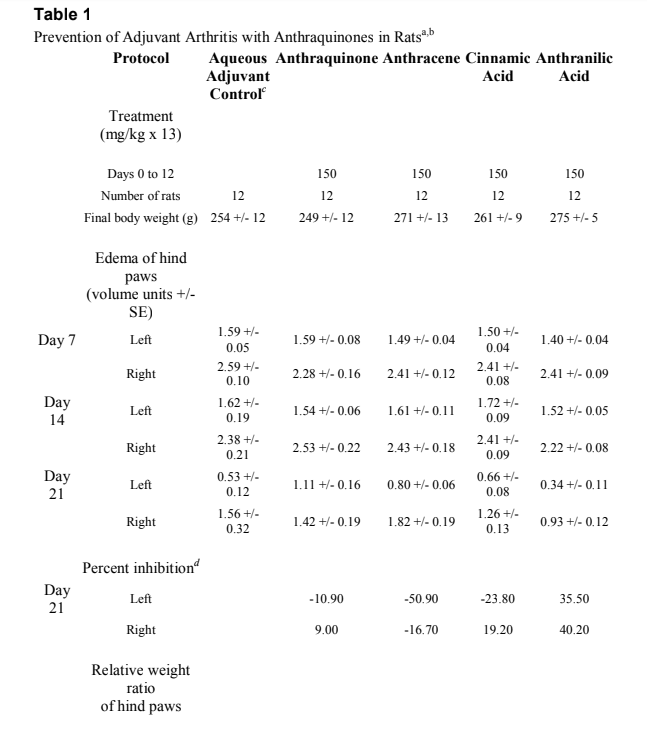 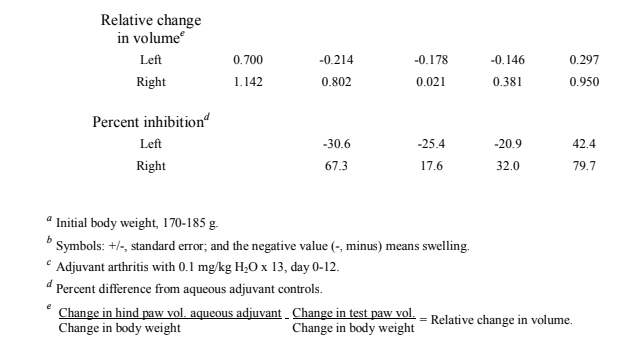 Anthraquinone had the most preventive antiarthritic activity recorded of the three Aloe  compounds tested. Anthraquinone inhibited inflammation 67.3%, which was the largest  response next to anthranilic acid. Anthracene had no antiarthritic activity, but a 17.6%  inhibition of inflammation was obtained in the inflammatory paws. This is about one third  the effect seen with anthraquinone and anthranilic acid. A good positive anti-inflammatory  response was also obtained with cinnamic acid (32.0%).

Anthranilic acid had no antiarthritic  activity in the regressive phase,  unlike its ability to prevent the  onset of the disease (Table 2; Fig.  2). On the other hand, anthraquinone showed anti-inflammatory activity, but exhibited  no anti-immune response in the  regression phase. Cinnamic acid  exhibited no anti-inflammatory  effect, but a 17.3% regression of the  immune response was recorded.  This is somewhat opposite to the  effect measured against prevention of arthritis. Since the anthraquinones show activity that helps to explain the overall response seen with Aloe, future studies should evaluate other ingredients such as amino acids,  enzymes, vitamins, and saponins. 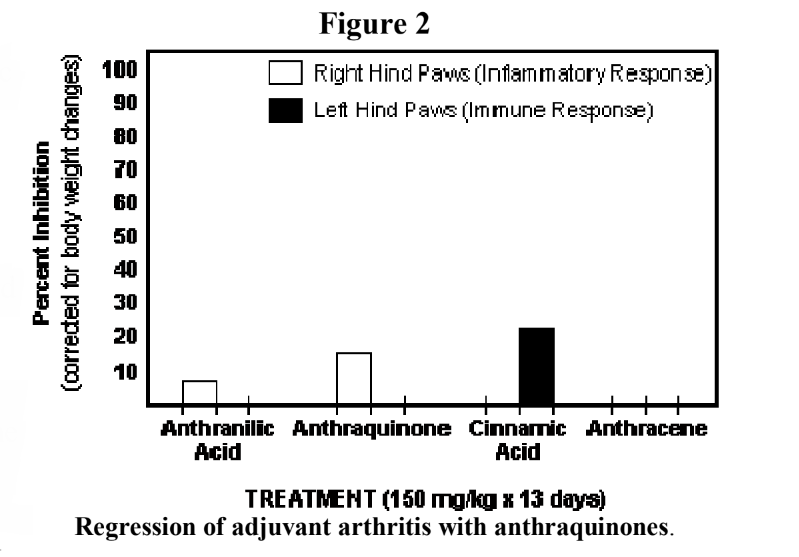 Aloe vera is one of the most commonly used herbs in alternative medicine. It’s available in many forms, such as pills, powder, gels, and as a leaf.

Known for its healing properties, it’s popular for treating small skin abrasions, such as sunburn, but it may also help with joint pain.

Topical application: You can apply a gel directly to the skin. 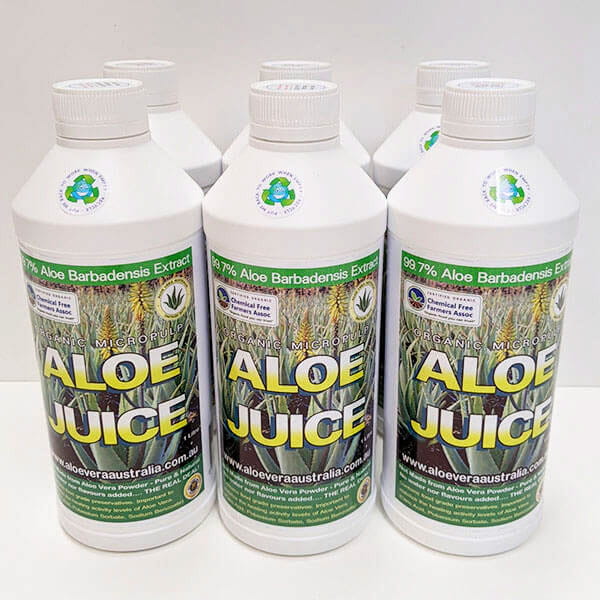