This research shows the vital significance and importance of Aloe Vera. It is a descriptive research. Aloe Vera is a vitally important plant that has been used for different oilments i.e. geotron testinal, gont boils, etc. It has several other properties or charactertics incluidng antibacterial, anti-inflamatory and antiseptic attributes. Easy growth, maintenance and multiple uses of aloe plant’s constituents have promoted several elaborated investigations in public and private sector. 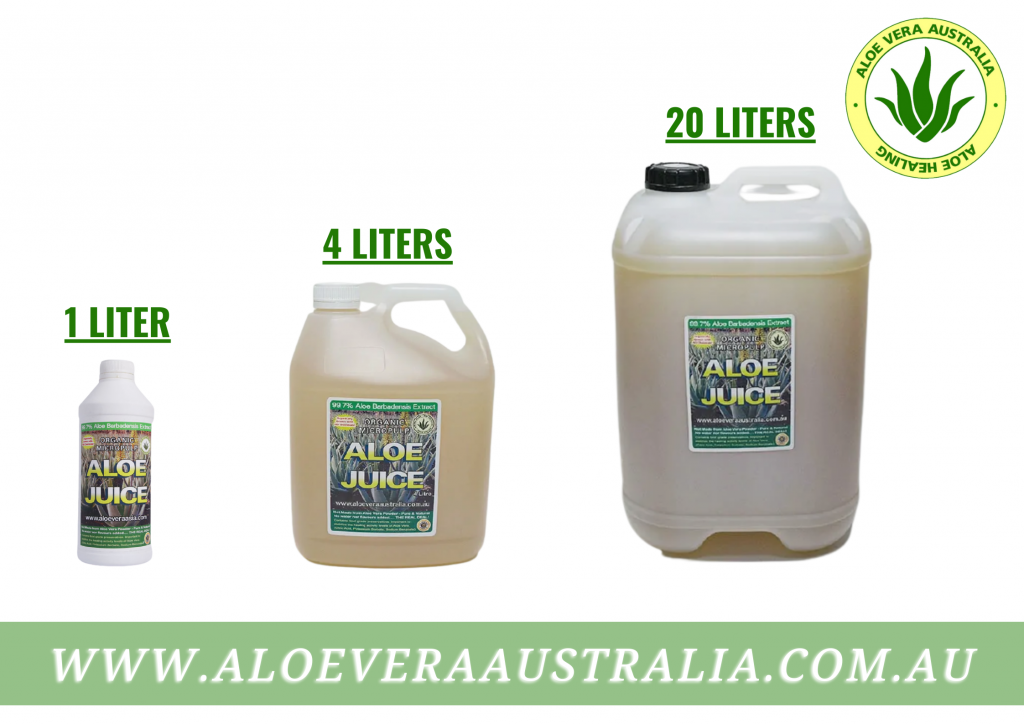 Herbs have been used for different remedies in all cultures. In Asia, plant products and plant-derived drugs have been used therapeutically for centuries. More recently, people have become more interested and better informed about the use of herbs [1]. The use of herbal remedies reached its zenith in late 1800s and early 1900s [2]. In early part of 20th century a dramatic decline in use of herbal remedies began in USA, due to isolation and chemical synthesis of structural analogs and so herbal remedies disappeared from pharmacy shelves. Fifty years later, trend towards herbal remedies reverted and pharmacy shelves started to fill again. A survey in 1997 showed that nearly sixty million people were using herbs and a 75% increase in sales occurred over the past years [2]. In fact, herbal medicines played an important role in treating and preventing people from debilitating diseases since long. The role of plant-derived medicine in treating diseases will ever increase. Thousands of plants have been claimed to possess medicinal properties. Throughout the world, today, extensive investments have occurred for the therapeutic applications of herbal plant-resources, which are of unlimited abundance around us, to improve the quality of life. Aloe vera is a vitally important plant that has been used in folklore for different purposes, such as for healing boils, wounds, burns and treatment of different ailments. Ancient Egyptians papyrus, Mesopotamian clay tablets contained Aloe as an active ingredient used in curing infections, treating skin problems and as a laxative [3,4]. The word Aloe vera appears to be derived from Arabic word “Alloeh”, which means “a shining bitter substance.” We still refer to “bitter Aloes” describing the laxative drug still listed in U.S. pharmacopoeia today. There are many romantic tales about Aloe, suggesting that Egyptian queens, Nerfertiti and Cleopatra, used it as part of their regular beauty regimen [5]. Supposedly Alexander the Great in 333 B.C occupied the island of Socotra in the Indian ocean for its famed Aloe supplies, needed to treat his wounded soldiers [3,6]. Aloe was used by Hippocrates and Arab physicians, and was introduced to Western Hemisphere by Spanish explorers.

Aloe is also common in both traditional Chinese and Ayurvedic medicine. The Chinese describe Aloe’s skin and the inner lining of its leaves as a cold, bitter remedy which is downward draining and used to cure constipation due to accumulation of heat [7], the gel is considered cool and moist. In Ayurvedic medicine, the traditional medicine of India, Aloe has multiple uses inclusive of laxative, antihelminthic, hemorrhoid remedy, and uterine stimulant. It is used topically, often in combination with licorice root, to treat eczema or psoriasis. In Arabian medicine, the fresh gel is used on the forehead as a headache remedy or rubbed on the body to cool it in case of fever, as well as being used for wound-healing, conjunctivitis, and as a disinfectant and laxative [4]. The aloe gel has been extensively used in gastrointestinal disorders, including peptic ulcer, and its clinical efficacy has been documented [8-12].

In recent times, Aloe vera gel has been used as an active ingredient in hundreds of skin lotions, sun blocks and cosmetics [13]. The gel’s use in cosmetics has been increased by claims that it has anti-aging effects similar to vitamin A derivatives [13]. Aloe gained popularity in the United States in the 1930’s with reports of its success in treating X-ray burns [14]. Recently, Aloe extracts have been used to treat canker sores [15,16], stomach ulcers [16] etc. Many homes keep a plant handy in the kitchen where it readily thrives in bright sunlight with little care. In case of a minor burn, a fresh leaf can be cut and the gel of the inner leaf applied directly to the burn immediately after the injury. The inner leaf lining of the plant is often used as a natural laxative. In a quite recent survey (1990) of members of a health-maintenance organization, Aloe vera was used by 64%; of these, 91% believed it had been helpful [17]. Aloe is also an ingredient in Compound Benzoin tincture [18]. 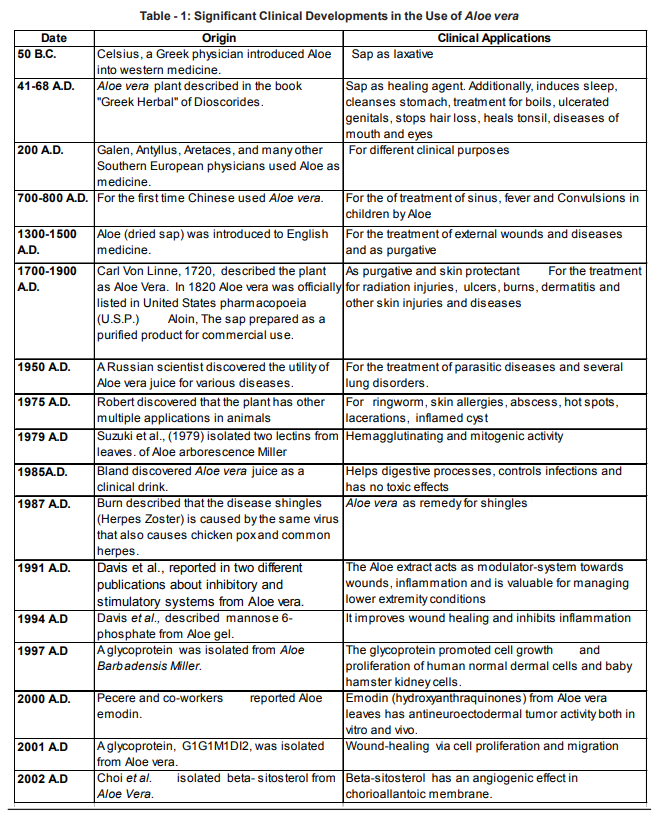 Although, Aloe has remained stalwart over the aeons of time since the Biblical era to the 20th century, but it has never achieved a true notoriety as other products i.e. foxglove, digitalis, cinchona (quinine), or willow bark (acetyl salicylic acid). This position of “poor relative” across the tracks has been the fate of Aloe, partially because of the failure of industry to fund scientific investigations and because of the slow progress of science in developing models to test Aloe. The first real investigation, which provided scientific enlightenment concerning Aloe’s therapeutic efficacy started early in twentieth century [19]. That was the age when the medicinal chemists traveled extensively and bought back plants, reputed for medical applications including cathartics, in order to isolate and characterize active substances using the chemistry of the day. The significant clinical developments in the applications of Aloe vera are listed in Table-1.

The precise and comprehensive isolation and analytical techniques have made it relatively easier to provide more information about the active principles of this wondrous and magical Aloe plant [20,21]. Thus a large number of chemical substances have been identified, which act as cathartic, emollients, accelerator of wound-healing [24] and modulator of immune response [22,23]. These include inorganic ions ( Na, K, Ca, Mg, Zn, etc.) [34] and small and large organic chemicals of quinone family [25-28], free sugars [29], carbohydrates (polysaccharides) [30-35], enzymes [36,37], lectins [38,39], proteins and the products of their breakdowns i.e. peptides and amino acids), vitamins [50] and many more.

CONCLUSIONS
The ease in growth and maintenance of Aloe plant and multiple uses of its constituents have prompted several elaborate investigations in the private and public sector. Aloe Vera research based on comprehensive biological, biochemical, chemical and clinical studies have opened up new areas, and many more effective uses are likely to be developed. There is a major scope in the promotion of recombinant-DNA based studies, targeting compounds of value to be isolated and produced in stable and realistic quantities. The procedures of isolation and maintenance of Aloeproducts in stable form required special care and these have been established after painstaking efforts.